Our guesthouse , is a typical Flemish townhouse, with a stepped gable.

Authentic, steeped in history, green and quiet … here you are in a corner of the city famed for its writers, all contemporaries of the great Flemish poet, Guido Gezelle who have given their names to the streets of this quarter.
Our street, with its English-style front gardens (where, in our case, bikes are freely available for your use !),, is a real oasis of green, sited within the old medieval ramparts.

The rooms and terrace at the back of the house offer a stunning view over the rooftops and towers of Bruges and also provided the inspiration for the name of our b&b. « A Room With a View », is certainly well deserving of this title !

The house, which has been entirely renovated, has retained its original doors, floors and chimneys, creating an elegant atmosphere of old-world charm. The sober decoration and modern furnishings of the two rooms and the loft/studio provide a good standard of comfort.

This successful combination of ‘old’ and ‘new’ and our exceptional location, not far from the city centre but in a quiet residential area, has led to our inclusion in several tourist guides : Petit Fûté = the French Lonely Planet, Charming Guest Houses , The Most Beautiful Guestrooms in Belgium, …. 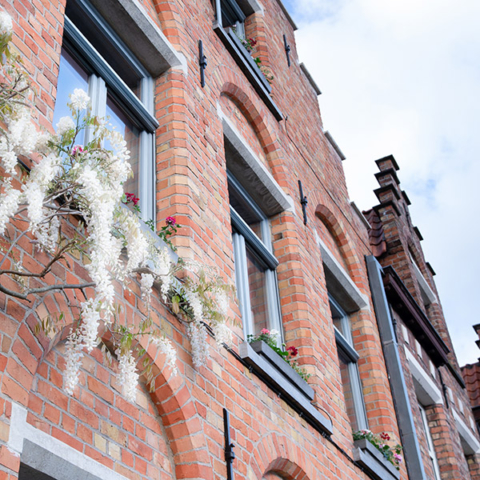 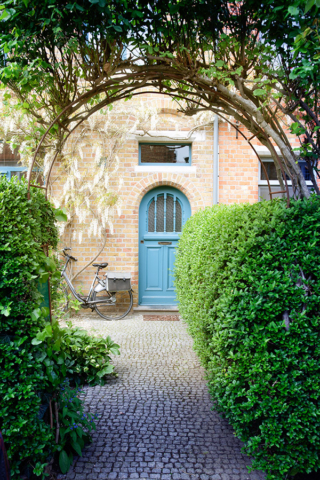 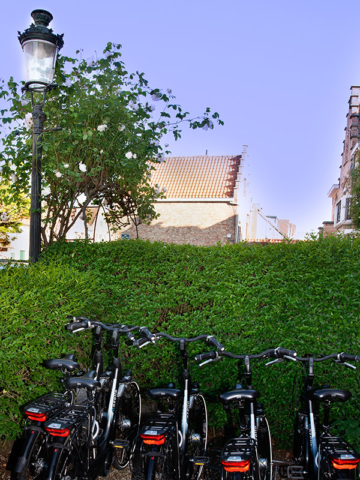 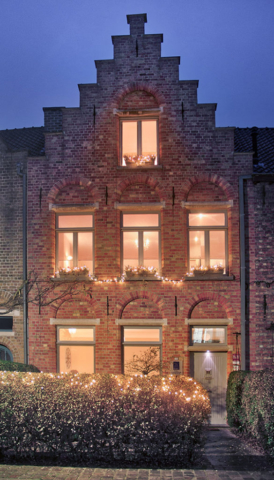 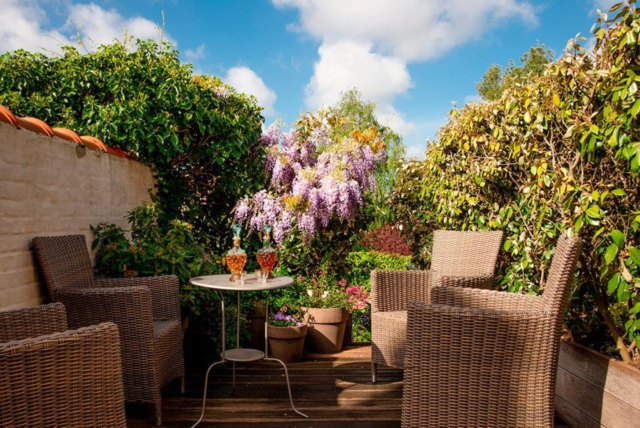 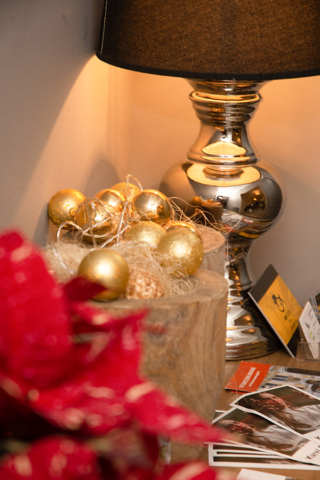 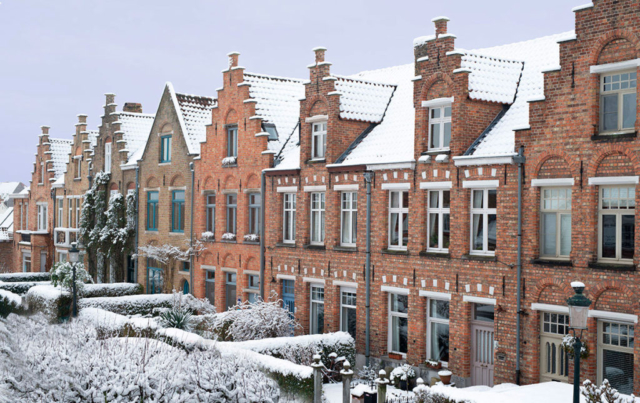 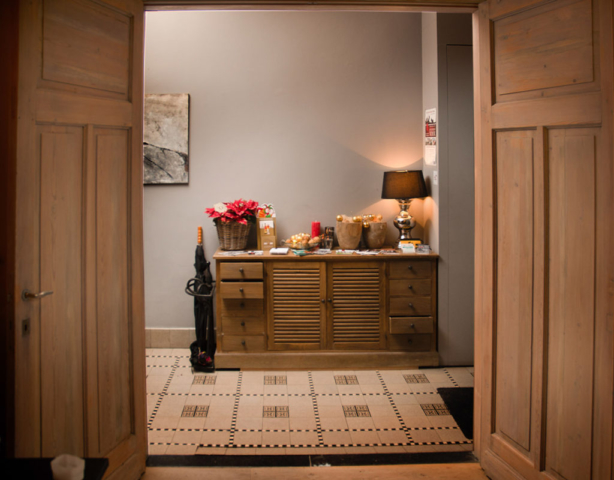 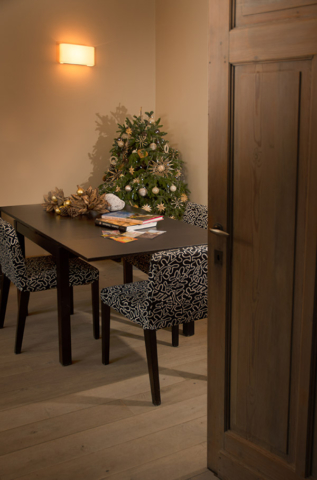 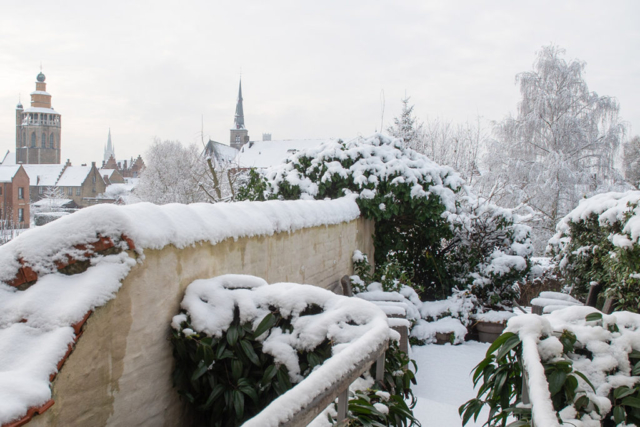 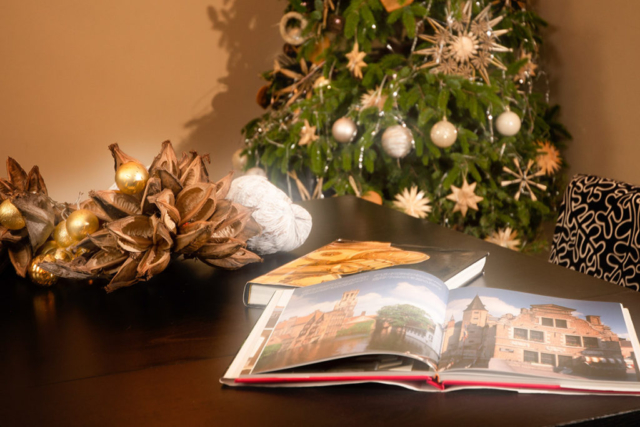 Away from mass tourism …

The view from our guesthouse is dominated by the distinctive silhouette of the famous Jerusalem Church, founded in the 15th century following the return of members of the Adornes family from a crusade to the Holy Land. In the shadow of the church – which is still the property of the descendants of this Genoese merchant family, who made their fortune here in the Venice of the North– stands the Bruges Lace Museum.

The Folklore Museum – suffused by the rich smell of traditional acid drop sweets, still made on site each Wednesday – uses everyday objects and activities to show how life was lived in the Bruges of yesteryear.

Further along the same medieval street (Rolweg) stands the birthplace of Flanders’ most famous and well-loved priest-poet, Guido Gezelle. His childhood home has now been turned into a museum dedicated to his work, whilst the large garden encourages visitors to indulge in a moment of poetical reflection.

The Guild of the Archers and Crossbowmen welcomes members of the present-day ‘bourgeoisie’, allowing them to discuss business in elegant surroundings and to demonstrate their prowess in the time-honoured art of Diana the Huntress.

The English Convent – with its magnificent Baroque dome overlooking the city – evokes memories of Florence and of the famous film by James Ivory, which gave our b&b its name: ‘A Room With A View’..

On the ramparts – a defensive girdle of greenery and water that offered protection during the Middle Ages – stands the ancient Cross Gate, one of the four surviving medieval gates of the city (originally there were twelve). Nearby there are a number of old windmills, all preserved in perfect working order. The sails of the ‘Bon Chiere’ mill can be seen from the windows of the 2nd floor of our B&B.

The Major Seminary, a Cistercian abbey dating from the 17th century, played host to the magnificent manuscript exhibition ‘A Wide World of Open Books’during 2002, the year in which Bruges was the Cultural Capital of Europe.

To round off your exploration of our neighbourhood, why not try a ‘Brugse Zot’– a traditional blond beer, brewed locally – in Bruges’ oldest pub : Café Vlissingen which dates from 1515 and has retained much of its original interior. 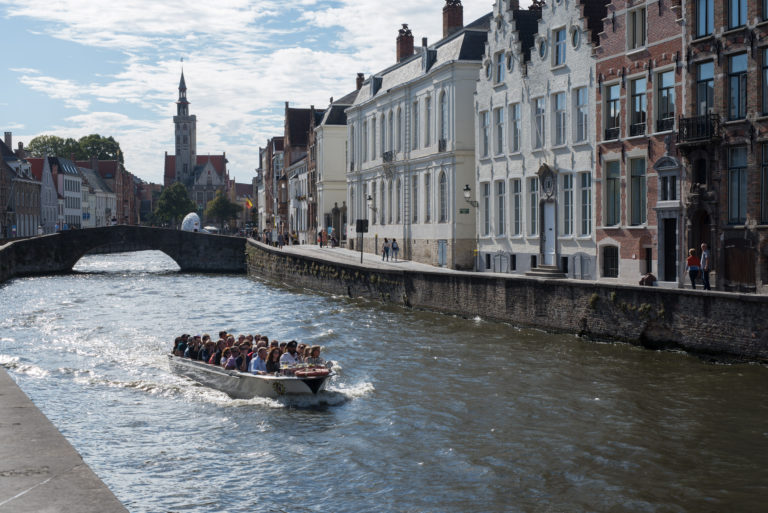 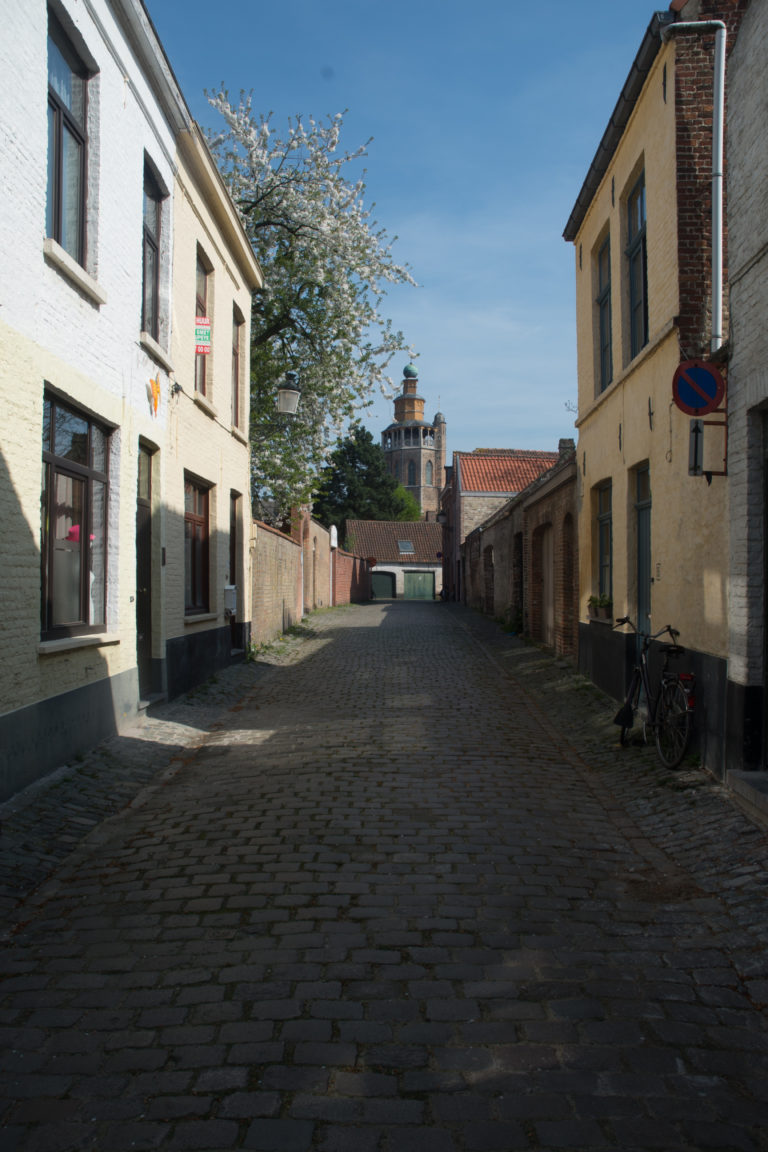 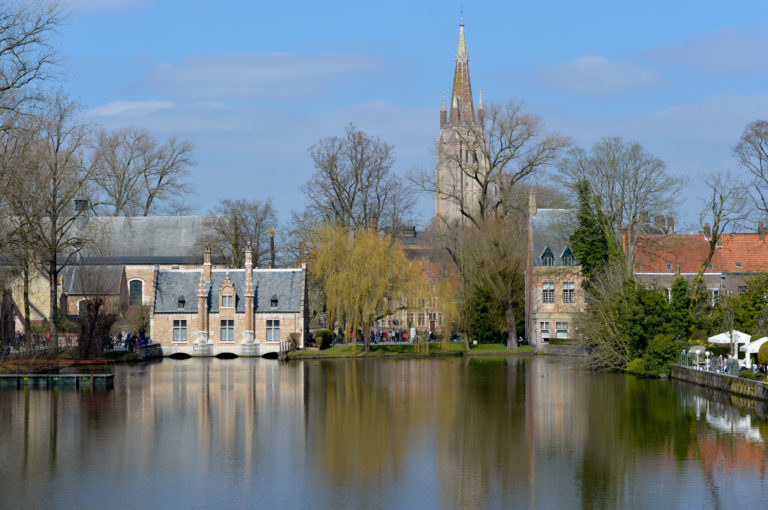 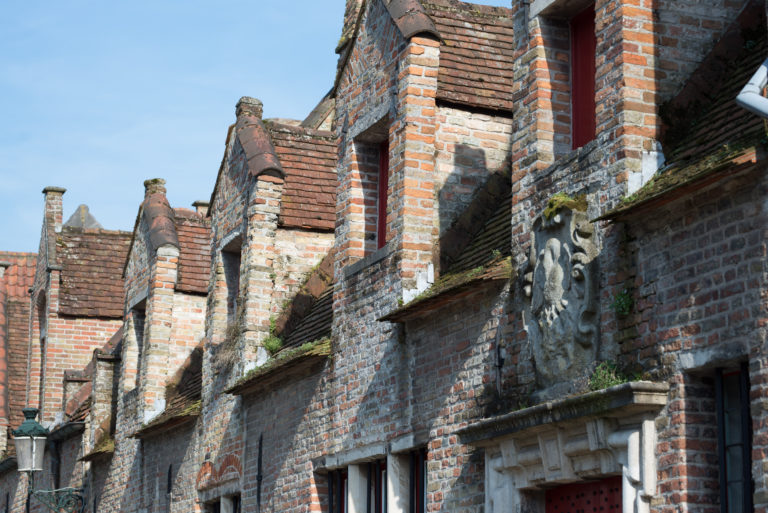 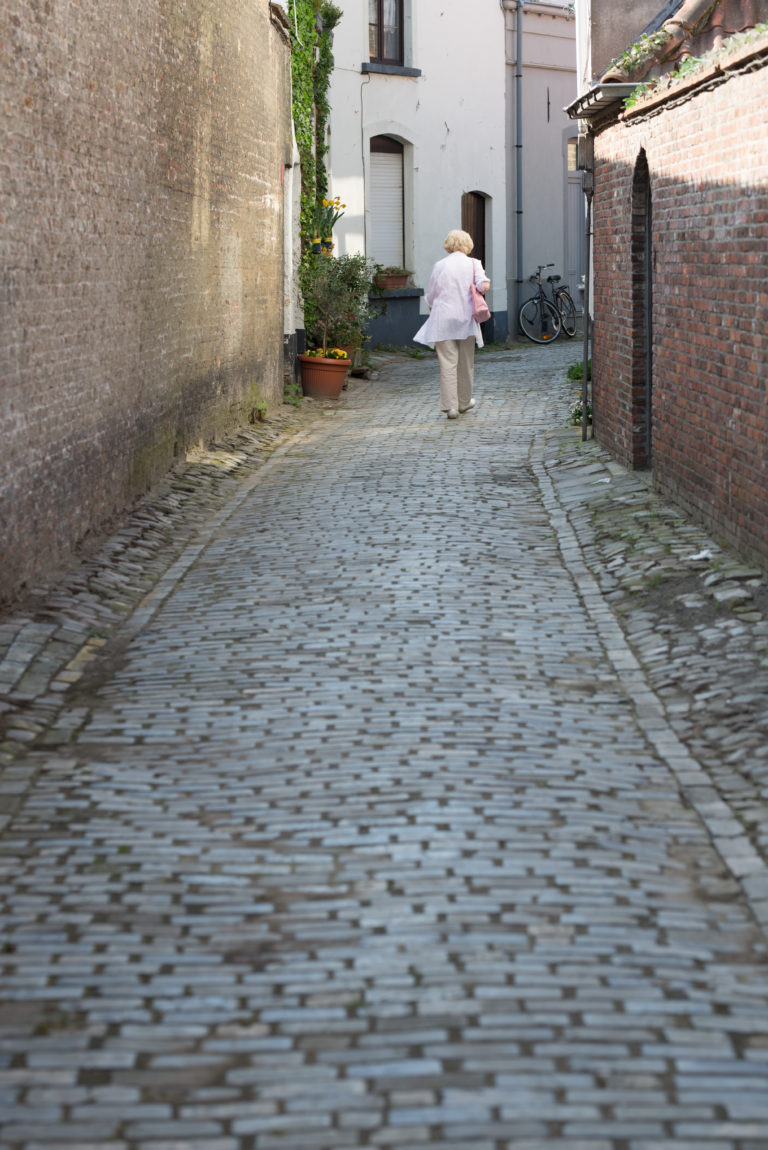 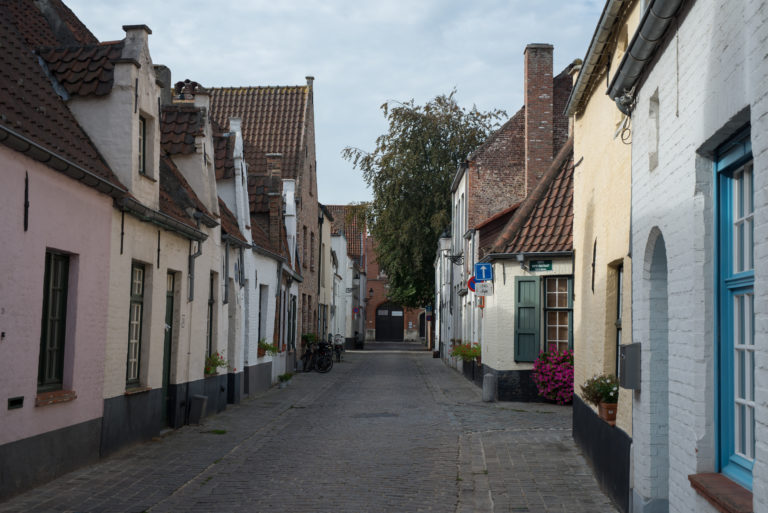 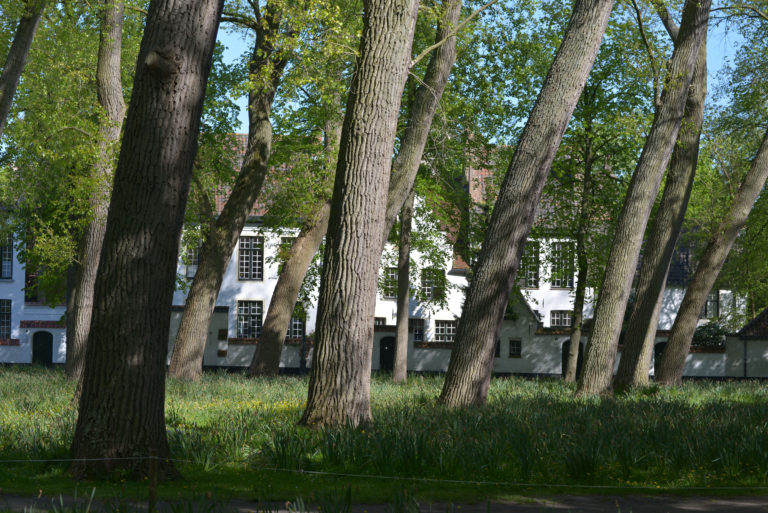